So dear friends, don’t miss the opportunity to read for free “No steps on the snow”! From june 12th to 16th on Amazon great free promotion. It is the English edition of the Italian “Nessun segno sulla neve”, winner of the National Literary Award Circe 2013. It’s a noir plot that starts nowadays but deepens its roots in 1968 and the students fight in Rome. Francesco, a brilliant middle-aged oncologist, signs in a social network while surfing the Internet together with his son, and bumps into the profile of the girl he was desperately in love with during High School ‘68, when a horrible homicide happened and the guilty was never to be found. And his current life splits up!

The end is stunning and umpredictable, just like a reader’s four stars review explains:

“There is so much I cannot say without ruining the ending, so let me leave it at this: I didn’t see it coming. If you’ve seen the movie Audition by Japanese director Takashi Miike, you know how easy it is to follow the flow of a story and then get hit with a brick in the face as the truth comes out. That happens in No Steps On The Snow, and was well worth my time.”

During these first days of promotion the book has already reached the top Best Sellers in Canada and United Kingdom. The following is the link to Amazon.com, but you can have it all over the world!

And don’t forget, if you love the paperback edition, it is available on Amazon:

If you like, just go and take a look at my brand new English website, you can read about English editions of my works. Have a nice read! 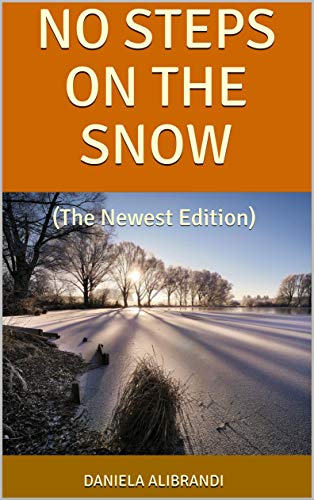 The wonderful news of this hot month of July is that my English Edition “No steps on the snow”(New Edition) is now a papery book, immediately available all over the world! It is a dream that comes true for me. This book is the English edition of “Nessun segno sulla neve”, the first one I wrote. In its Italian edition this psychological thriller, with great emotional impact, won the National Literary Award Circe 2013, and was successfully presented in the most important Italian book fairs, such as Modena Literary Fair and the Rome Piùlibripiùliberi Book Fair. It got the best five stars reviews from critics and readers.

It was also chosen by the Rome City Hall for a cultural event of the Roman Summer and presented in the gardens of Castel Sant’Angelo in Rome, during an unforgettable summer evening, while at the piano a music director played, near the Tiber river and under the stars, all the songs that I recalled in the book.  “No steps on the snow” was published in three successful Italian editions and inserted in two editorial collections Beyond the City and Innocent Crimes. It is distributed in UK by Abe Books, Gloucester, assessed with five stars review and it is listed at the Italian & European Bookshop, in London. It climbed the Amazon Best Sellers list in USA, Japan, Germany and Italy.

SOMETHING MORE ABOUT “NO STEPS ON THE SNOW”

This book was my first experience. I started writing it in a very particular moment. In fact, working, following my children, my husband and the house, I never had time to sit and write what I had in mind. Unfortunately, in 2008, an accident occurred to me, that left me in bed, motionless, for almost two months. The only hand I could move was the left one. And with this hand I started writing the book. I was alone many hours, everybody was at work or at school, and from my house my glance could caress the Mediterranean Sea. Words and thoughts came easily to fill this story. Italian literary critics defined this book  The one written with the left hand, the hand of the heart…

If you prefer reading a papery book, smelling its scent and save it for ever in your shelf, you can purchase “No steps on the snow”(New Edition) in every Amazon Store. Now you can find it also in paperback, requiring the delivery comfortably at home or at the easier delivery spot .

To celebrate the event of the book release in the papery edition, from July 11th to 15th “No steps on the snow”, in the e-book version, will be in free promotion. Don’t miss it! 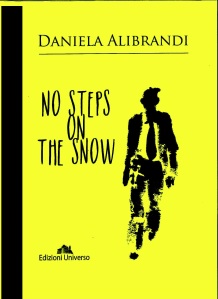 NATIONAL LITERARY AWARD “CIRCE 2013”- A psychological thriller that starts nowadays, but deepens its roots in 1968, during the student protest in Rome. THE PLOT:Francesco, a brilliant middle-aged oncologist signs in a social network while surfing the Internet. He bumps into the profile of the girl he was desperately in love with during High School ‘68, when a horrible homicide happened and the guilty was never to be found. His destiny intertwines in an unpredictable way with that of the girl, now a mature woman. Desperate passions and deep loves of a generation belonging to the past. A thriller that leads to a stunning end.

The book is in catalogue at the Italian & European Bookshop in London.

Where to find it:

In the following link, where you can read the preview, and on Amazon stores all world wide.

It is with a contrast that No Steps on the Snow, by Daniela Alibrandi, begins. A father, Francesco, finds an old love flame on Facebook he had never forgotten even if not reciprocated by her at that time. A father who lives in an age where he feels unadequate and needs the help of his son to manage sailing in the Internet. But it’s not only this. There is an episode unresolved occurred in the “years of lead”, when boys and girls, also if revolutionary, tried to live their age amusing themselves, experiencing love and trying to change things. A homicide which had not been given a guilty, that had remained dormant since our protagonist relives the past. And he reminds those years with nostalgia, remembering his old love, now a woman who falls powerfully in his present life. The pace changes so quickly as to leave no breath. Calm, thoughtful and at once pressing and exciting. Indeed a slice of life lived as a main plot pulls the strings of the narrative, but never too hidden, there is this aura of thriller that makes reading the most exciting it could be. The striking thing that I always appreciate in any written, is the ability of the author to immerse the reader in the story and to make him imagine a background, a landscape and the situations described as if it were a scene from a movie. I think that No Steps on the Snow may very well be put in place as an Italian Thriller, with all the elements to keep viewers glued to the screen, having done the same with readers.I feel really to recommend it because there are many good books for luck, but good books that you’ll always remember are more difficult to find…and this one will be not easily forgotte.

Wow. This novels provides a multi-dimensional experience. I approach this novel and review as a man fascinated with languages and the hurdles forced by translating not only to another language, but to another culture. What I have to say is said from the perspective of an individual who has lived in another country, visited ten, has spoken a few languages through the course of his life; I write from the perspective of one who is not daunted by the act of translating the meaning of a sentence that despite being presented in English, was obviously written by a non-native speaker. This novel was written by an Italian author and I could tell while reading it that it was well composed – in it’s original language. I am providing a review that does not consider the burdens of translation to be detrimental – rather is setting that aside, and proceeding to review the story itself; and what a story it is.

I’m not big on romance novels. I am, however, big on psychological thrillers – this book claims to be both. So it was with a somewhat detached interest that I approached a novel that for all intents and purposes begins as a romance. Thankfully it is not a traditional romance – what kept me going was my fascination with the psychology behind the main character – a man named Francesco for whom infidelity is simply his natural state and he embraces it; a man who has mastered deception and yet does not utilize the skills out of malice or spite. He is perhaps a bit of a sociopath but not so far removed as to be unlikable as a protagonist. He loves his wife, he loves his family, and he loves leading his double life. As a man myself I cannot justify his actions, yet I also kept reading. Should infidelity in a main character be a problem for the reader, I recommend they continue to push through.

The ending is worth it.

Daniela Alibrandi is an accomplished writer with established credentials. In “No Steps
on the Snow” she knows of what she writes – Rome, Italian men, marriage, infidelity,
and Italian student riots.

The book is a psychological thriller written from the POV of Francesco, an Italian doctor,
with a life that is the envy of any man who wants a loving wife, loving children and a
loving mistress. But as many other men in mid-life he wants something more so he goes
to the Internet in search of an old flame from his days as a student.

Why with a perfect life like his would he seek out Milena? Passion. His marriage lacks it
and he’s the primary reason. Milena has been the passion in his life. He was thwarted in
his desire as a student because Milena was in love with a student revolutionary. Her
lover was murdered the same night she was attacked by Nuccio, Franceso’s best friend,
in a plot Francesco put together with Nuccio.

Francesco shows himself to be a loving husband and father manipulating his wife and
children so that his life can be lived precisely the way he wants it. He wants Milena and
he gets her to agree to meet for coffee. They begin a torrid affair that leads Francesco
to consider giving everything up for life with the only woman he’s really loved. As a
reader I found myself questioning if Francesco could love anyone with an ego as
dominant as his.

He orchestrates a Christmas family vacation as part of his marriage breakup so that
they can be together to say farewell. Milena and Francesco come together but in the
end their mutual passion leads to an unexpected end.

Ms. Alibrandi has written a multi-dimensional book narrated by an Italian male who is a
master in the art of deception. The challenge he faces is how to avoid deceiving himself.
Bravo Ms. Alibrandi.
5 STARS – Bill Snyder